I am excited to present you a new blogger to hugecooking.   Kevin from Closetcooking was very accepting when I asked him to do a guest post on Cooking.  I have been reading Kevin’s blog for a while now and mostly drooling over stunning photography and loving his recipes.  I gave Kevin full reign over what to post and as you can see below – it looks like he came up with another winner. 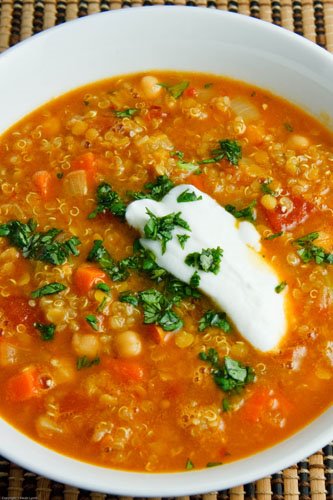 Recently I have been enjoying exploring lentils though up until now I have only been using the green du puy lentils.  There are many different types of lentils and I wanted to branch out and try a new one.  When I was out shopping the bright red lentils caught my attention and I picked some of them up.

Despite the fact that we have had a few warm days the weather has gotten cooler again and I was in the mood for a soup. While searching for recipes I came across a few for curried red lentil and chickpea soups that sounded good. Using those two main ingredients as the base for my soup I proceeded to add my favorite soup vegetables; onions, carrots and celery.  Next I added some diced tomatoes to add more body and red to the soup.  I thought that I was pretty much done but then as I was pulling out the lentils I noticed the quinoa in my cupboard and I recalled that it had worked well in several soups that I had made before and I decided to throw some in as well.  I had ended up with a recipe for a nice and healthy sounding soup that also promised to taste great.

Red lentils cook pretty quickly and I only needed to simmer them in the soup for as long as I would have simmered the soup to allow for enough time for the flavours to mingle anyways.  The curried red lentil soup with chickpeas and quinoa was nice and easy to make and it did not take long.  This soup could easily be made on a week night.  I really enjoyed the combination of the red lentils, chickpeas and quinoa and the textures that they added to the soup.  The soup was nice and thick and hearty and yet somehow light at the same time.  With the curry powder in it the soup was nice and aromatic and it tasted great.  I wanted a bit more heat in the soup so I added some chili sauce though you could easily omit it or reduce it or even increase it depending on your tastes.  I garnish the soup with some fresh chopped cilantro and a dollop of thick and creamy strained (or Greek style) yogurt.

I hope you enjoyed this post!  The soup looks excellent and I am very thankful that Closetcooking took the time to guest post on Cooking.  If you are one of Kevin’s regular readers drop a comment below and let him know what you think of the recipe.  If you are a regular Cooking reader, I definitely appreciate your support and love reading your comments.  As you read this, I wonder if I am on the beach in Jamaica? I hope you have a great Wednesday.

4 Melissa @ For the Love of Health

I love quinoa! Never thought to put it in soup! Great recipe!

Yum, two of my favorite ingredients in one recipe–chickpeas and quinoa!

I love the sound of this recipe, thanks!

The good old Quinoa! Funny that it was around since ancient Egypt!

Excellent grain everyone should have in their cupboard!

This is a lovely soup! My stomach starts to rumble just looking at it (it is after all dinnertime..:))

That sounds fantastic!! I’ve never had quinoa but this recipe makes me want to try it

This sounds like such a delicious recipe! I love curry, chickpeas, quinoa, and lentils…sounds like a winner to me! =)

Good looking soup, with an easy to follow recipe, and great ingredients. I like the addition of quinoa to soup, gives it a really nice texture & body. The photo is quite stunning as well – so vibrant!

Kevin, I’m a very happy reader of your blog. I’ve been lurking there for quite a while. Glad to see your guest post on Cooking.

Zesty – As always, love your blog

I enjoyed your post. Great to host Kevin here. He has a great blog.

Love it! Love lentils and love chick peas AND love curries! This looks like a fabulous combination of all of it!

I am a long time Closet Cooking fan because of great recipes like this. Go Kevin!

Yet another winning recipe from Kevin. Some of my favorites here. I’m tempted to change my dinner plans

Made this tonight for the family. Just happened to have everything on hand. I used sriracha for the chile sauce… just a teaspoon, since my family likes hot food only mildly hot.

This sounds and looks delicious! I can’t wait to try it out.

We need to start eating healthier at my house and this definitely fits the bill!!

Really enjoyed reading this thank you!

I made this in the crock pot, and it was fabulous! All of my friends loved it, too, and it’s hard to please them!

This is the second time I made this soup and it is fabulous.
Rich and flavorful, I love the yoghurt and cilantro at the end ..
Everyone should try it.
Thank you so much.
C.nut

Somewhere – else I think – I jotted down this recipe but it had 2 1/2 cups quinoa – and that wasn’t cooked. I thought that was an awful lot but I followed what I had written. It came out a thick stew! BUT it is very good – in particular when you add plenty of fresh cilantro and greek yogurt! Yum!

This is by FAR one of the best soups I’ve ever tasted! It’s so full of flavor, it’s not greasy, perfect consistency, Cooking, healthy, and satisfying. I cannot stop eating it!! This is a definite keeper recipe! OUTSTANDING!!!!!!!!!!!!!!

I made the soup. I didn’t have chickpeas, so I used fava beans. I didn’t read the recipe properly and put in 1 cup of uncooked quinoa. The result, a delicious stew. Thanks

THIS IS AMAZING! i added an extra 1/2 TB of curry powder, and 1/2 TB of garam masala too. added some water as well, since i had potatoes on hand i didn’t want to waste… i diced those up small and added when i did the lentils… figured a bit of water would help keep it soupy. i increased the size of the batch a bit, so i have lunches for next week… so glad i did! i could probably live off of this soup. bonus: carnivorous boyfriend loved it too!! i will be making this regularly.

This was good. Next time I will add an extra cup of broth.

Just made this….Oh My God!!! So easy to make and So delicious!!!

Made this yesterday. Yummy! Added some cooked squash and some extra broth and tomatoes to thin it. Will make again.

Am definitely trying. Love all the ingredients.

I’m a regular reading of Closet cooking and I love this recipe! Thanks for sharing!

Fantastic recipe & so easy! Definitely one of my go-to’s now! YUMMM!

Sorry to hear Kevin under the weather. Get well soon. Love the soup recipe. Always looking for additional ways to use quinoa. This is a winner. Thanks

I just came upon this recipe on pinterest and made it. Best soup recipe I have found in YEARS! And I make a lot of soup. Delicious! I know this post is really old, but be assured people are still finding this great recipe. Thanks!

Omg! This soup was DELICIOUS! My family members couldn’t get enough. It was fragrant, vivid in colors, and oh so good for the palette! Truly a keeper! ….I did use organic when possible, including organic dry chick peas and quinoa. Just threw them in at the same time I placed the lentils. Didn’t find the red lentils so used the standard. Also used a tspn of red curry paste for extra flavor. I was generous with the curry, and other seasonings and eyeballed the veggies as well as I had to double up the recipe since there was a large crowd…..but the soup is a winner, especially on a cold day like today served to warm the soul and satisy the hearty appetite! Thank you!

This was soooo good. Had to share the link. Thanks fellas!

I didn’t care for this… Kind of bland. I added a con of coconut milk and it was a lot better. I would not make it again.

I am constantly thinking about food, reading about food, trying new interesting and exciting ways to prepare food and of course eating food. Ever since I was a little boy — I have always been fascinated with food.